History:  music ranges from simple, goofy, non-sensical tunes to complex, crisp pop masterpieces. Their music has been described as a pastiche of Latin and African beats, 50’s rock-n-roll, and Spaghetti Western soundtracks. The band packaged all of this together with an incredible sense of humor and vigor. With thundering African/Latin percussion and twangy, Duane Eddy guitars, Bow Wow Wow maintained a consistent image and sound through a host of record producers in their short life span. But 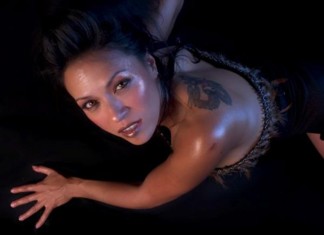 despite the numerous people who shaped their sound from 1980-1983, a strong Bow Wow Wow identity remained intact. That unique musical style created a wonderful antithesis to the gloom of the London and U.S. music scene in the early 80’s when unemployment and inflation were at record highs in both countries.

The year is 1980 and the place is London. Adam and the Ants were moving away from their “Dirk

Wears White Sox” punk days, adopting the driving rhythms of the central African Burundi tribe, the war paint of Native Americans, pirate costumes and swashbuckling antics. This change came about through the mechanisms of the ex-manager/image consultant of the Sex Pistols, Malcolm McLaren. After charging £1,000.00 for his advice and consultation, the Ants (Dave Barbarossa, Matthew Ashman and Leigh Gorman) fell prey to McLaren’s charm and left Adam to find other Ants.

McLaren knew the group needed a lead singer. Legend has it that he discovered the 14-year-old Myant Myant Aye (Burmese for “cool, cool, high”) singing in a north London dry cleaners. With Annabella’s voice, smarts and charm, she fit McLaren’s vision of a musical experience that would be part high camp and high concept, with a huge dose of adolescent sex and innocence. Bow Wow Wow was now ready to record.

Bow Wow Wow’s first release came in the form of the world’s first-ever cassette single. In July 1980, EMI released “C30, C60, C90, Go” only on cassette in the U.K. with “Sun, Sea, and Piracy” to accompany it. The single was followed by another cassette-only, U.K.–only release, “Your Cassette Pet,” an extended cassette EP featuring eight snappy tracks. One featured vinyl single came from this EP, “W.O.R.K. (N.O. Nah No No My Daddy Don’t), which was released in March of 1981 with “C30, C60, C90, Anda” to accompany it.

In 1981, McLaren, unhappy with the band’s limited success on EMI, took the gang (now sporting Mohawk hair cuts) over to RCA. The band’s first full album was released on RCA with possibly one of the most bizarre titles ever to grace any album cover: “See Jungle! See Jungle! Go Join Your Gang Yeah! City All Over, Go Ape Crazy.”
The album co

ver art caused quite a stir. For the cover of “See Jungle!,” the group decided to photograph a living recreation of the 1863 Manet painting “Dejeuner Sur L’Herbe” (Lunch on the Grass). The photo featured Annabella in the nude, tastefully turned away from the camera. Since she was only 15 at the time. Annabella’s mother tried to stop the release of the cover. McLaren won and the cover was issued amidst controversy of child pornography. The U.S. version of the album would not feature this photo but still presented Annabella only slightly covered in a see-through white dress. The “Dejeuner Sur L’Herbe” cover would not see U.S. presses until the “Last of the Mohicans” EP in 1982.

cer’s post for this album and hired a host of other producers. The album received great critical reviews and was a success in the U.K.

Bow Wow Wow’s first U.S. hit would have to wait for the release of the “Last of the Mohicans” EP in 1982. That same year, McLaren terminated his involvement with the band and went on to record his own albums. Producer Kenny Laguna, who had worked with Joan Jett, was brought in to record “I Want Candy” and to re-record and fix “Louis Quatorze” (which McLaren had originally produced using a weak mix).

The single from the EP, “I Want Candy,” was a Top 10 hit in the U.K., and made it into the Top 40 on the American charts. Looking back, that song seems to define something essential about the early 80’s. One, it marked a return to the 3 (actually 2:44) minute pop song; Two, the look of the band was just right for MTV, the “beach party” video becoming a staple on the fledgling channel; Three, it offered a wonderful, much-needed optimism for pop and “new wave” fans.
In 1983, tensions in the group were rising. Suffering from illness and exhaustion after intense US touring, they went there separate ways.

Twenty years on, Bow Wow Wow were asked to reform to help KROQ celebrate its 25th Anniversary. The band performed alongside such luminaries as Duran Duran, The Cure, Echo and the Bunnymen, Soft Cell’s Marc Almond and Interpol at the third annual Inland Invasion concert. The 45,000+ sell-out event, held at the Glen Helen Hyundai Pavilion on Sept. 20th 2003, was KROQ’s fastest selling concert ever.

Original members Leigh Gorman and Annabella Lwin were joined onstage by special guest Adrian Young from No Doubt, who took Dave Barbe’s seat behind the drums (Dave had prior commitments in the UK with dance band Cicane), and Phil Gough (who channeled the sound of the late Matthew Ashman).

After having a blast on stage in front of 30,000 + people, Bow Wow Wow decided to continue doing what they do best…playing killer live shows. Over the past years the band have also made numerous radio and TV appearances (including Jimmy Kimmel Live, The Orlando Jones Show, and FUSE TV’s Daily Download,), most recently recording segments for third series of VH1’s popular I Love The ‘80’s show, as well the entertainment show Extra, promoting Sofia Coppolla’s film Marie Antoinette). I Want Candy was also the lead song for the Russell Brand movie Hop and is also the lead song for Verizon’s recent advertising campaign.

Bow Wow Wow continued to perform  shows in Japan (2011) and the UK(2012), when original drummer Dave Barbarossa played with them.

I Want Candy
Do Ya Wanna Hold Me
Baby, Oh No