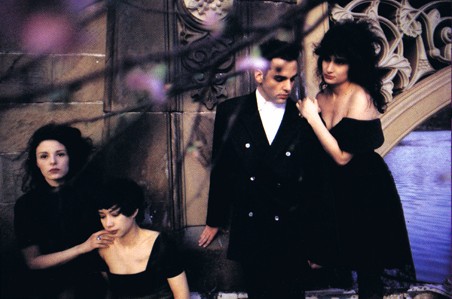 Though the quartet – disbanded in 1993,  they have regrouped to record several new tracks and re-mixes. This collection is the perfect compilation of the enduring dance and pop hits from their four albums. The collection also features new songs “Getting Faster”, “Try” and Bonus Track “It’s In Your Eyes” one of the first songs ever written by the group, but never recorded until now.

Friends since high school, Ted and Susan (who share the same last name but are not related) initially worked with Susan’s Philadelphia College of Art classmate Jade Lee in a band called Head Cheese in the early 80s. In 1984 Ted recruited fellow School Of Visual Arts

friend Lauren Roselli and a quick chain of events secured Book of Love its breakthrough. It was Roselli who got a copy of “Boy” to DJ Ivan Ivan who himself had just scored a dance hit with “The Dominatrix Sleeps Tonight” and was looking for new projects. Ivan then passed it along to Seymour Stein, head of Sire Records. “When Ivan played Seymour the demo of ‘Boy’,” says Ted, “he went, ‘That’s the One I want.’ ” ” Boy”, anchored by pulsating keyboards, infectious hooks and a deadpan delivery told the tale of a girl who wanted to be where the boys are but is “not allowed”. An underground smash in NYC, this one track had secured the unknown group a recording contract and a support slot that introduced them to America.

They continued to produce a steady string of influential club hits. “I Touch Roses”,

released in 1985 would eventually chart as a #1 dance single. On the self-titled 1986 album it featured not only the dance staples “Boy” and “I Touch Roses” but the dreamy “Modigliani (Lost In Your Eyes)” which also charted on the Top Ten and the ebullient “You Make Me Feel So Good”, Book of Loves’ first CHR radio hit. The bands warmth and vibrancy was obvious with Susan’s seductive vocals and Ted’s ethereal production work. Sticking to their art school backgrounds and post punk aesthetic, the album was a perfect pastiche of colors and flavors mixed with accessible pop sensibilities.

After a two-year opening slot for Depeche Mode as well as headlining their own tour, their second album, LULLABY was released. The first two tracks kicked open the door with the chart topping remix of Mike Oldfield’s “Tubular Bells (Theme from The Exorcist)” and the socially conscious “Pretty Boys & Pretty Girls” which was also a crossover on the Billboard Hot 100 Singles charts. The song became one of the earliest to address a new disease that was beginning to devastate NYC. “We talked about AIDS at a time when people were not talking about it,” Susan says. 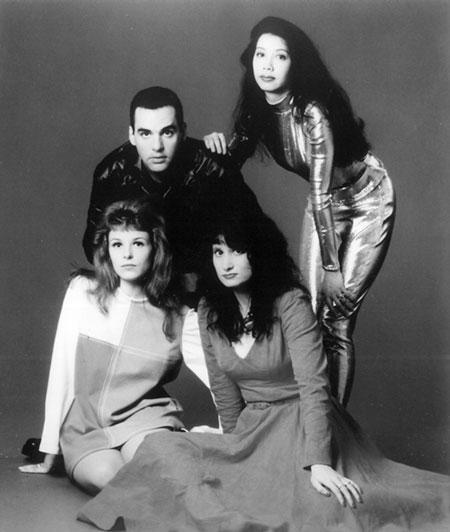 In 1991 BOOK OF LOVE released CANDY CAROL, a confection of nursery rhymes, spun sugar psychedelia and punk immediacy. Included in this BEST OF collection from this album is the chart topping “Alice Everyday”, “Counting the Rosaries” and an all-new 2001 version of “Sunny Day”.

Book of Love also went on to achieve further exposure with music included on film soundtracks: “Modigliani” in “Planes, Trains and Automobiles”, “Sunny Day” in “Silence of the Lambs” (also featuring band member Roselli in a brief but pivotal role), “Enchanted” in “Naked in New York”. In the year 2000, “I Touch Roses” was included in the film “American Psycho”.

LOVEBUBBLE, the band’s fourth album ” Was an eclectic mix of songs that go in a lot of different directions we haven’t before,” says Susan. “It reflects the personality of the band collectively and individually.” The album radiated positive energy and featured lead vocals by all four members including Jade Lee’s litany of thoughts over ambient computer blips on “Chatterbox” and “Hunny Hunny” sung by Lauren was the band’s AM radio bubble-gum tribute to an ABBA-esque sound.

The BEST OF collection is clearly a gift to Book of Love’s fans who have been anxiously waiting for more. Listening to their catalog now and hearing its startling freshness remains a testament to the artistic dynamic of the group. What’s made them consistently intriguing is how personal the music remains yet how universal it still sounds. “This is a perfect time for a retrospective,” says Ted. “We’ve added great new material and we can look back at out whole body of work with real objectivity.”