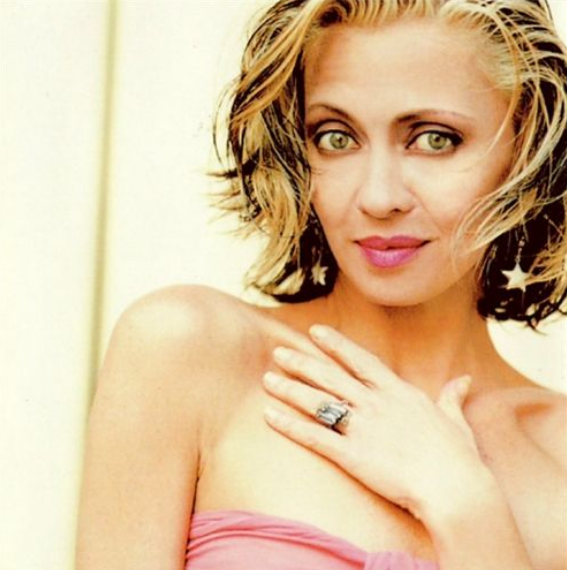 Stacey Lynn Swain, known by her stage name Stacey Q, is an American pop singer, songwriter, dancer and actress. Her best-known single, “Two of Hearts”, released in 1986, reached number three on the Billboard Hot 100 and the top ten on charts in other countries. Stacey Q enjoyed success with her other hits “Insecurity”, “We Connect” and “Love or Desire”, “Don’t Make a Fool of Yourself” and “Give You All My Love”. Stacey also spawned a radio and video hit “Synthicide” with her synthpop band SSQ in 1983.  Stacey Q  joins Lost 80’s Live in 2021 and 2022 on select show dates.

Main articles: Q (band) and SSQ (band)  In 1981, Swain was introduced to Jon St. James, the proprietor of Fullerton’s Casbah Recording Studio, which hosted recordings for the bands Berlin and Social Distortion. Jon was a big fan of synth bands like Kraftwerk and M; when he met Stacey Swain in 1981, he knew right away that this impossibly stylish former Ringling Bros. elephant girl and veteran of the Disney Main Street parade possessed star qualities perfectly compatible with electronic music, a genre Stacey also adored. She was enamored of the obscure 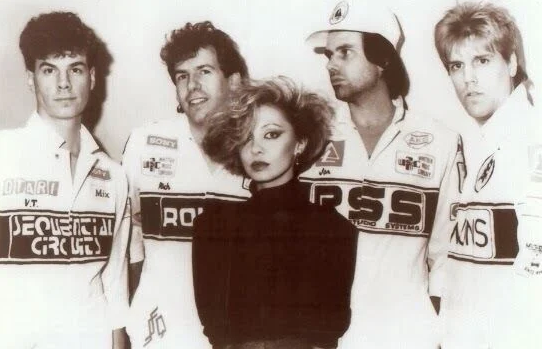 Japanese band The Plastics and The B-52’s, and simply could not get over David Bowie. As a student of style, Swain could literally turn rags into a fashion statement. On one occasion she went to the renaissance fair in Agoura dressed simply in two large pieces of soft leather she bought from a shop in Anaheim.  St. James was developing a synthpop group called Q, named after the James Bond character.  The band consisted of St. James on guitars, and Dan Van Patten and John Van Tongeren on vocoder and synthesizer. She served as the assistant producer on the band’s four tracks for The Q EP when St. James realized they needed a vocalist for their first track “Sushi”, which Swain provided as she had previously recorded demos at his studio.  She then became the lead singer for Q, although at that time, she still considered herself more of a dancer than a singer. In 1981, Q (the original project) was Jon, Dan and myself hence Jon Q, Dan Q and Stacey Q. Q, the original name of the project, references James Bond and the scientist responsible for all his high-tech gadgets.  The Q EP received little airplay except on college radio. Its success led St. James and Swain to develop more songs. In 1982, the group added drummer Karl Moet and synth player Rich West, but had to change their name because of copyright issues when producer Quincy Jones reportedly had “established use of the ‘Q’ moniker”. They renamed the band SSQ, which was inspired partly by a fishing endeavor where St. James “was fishing in a lake ‘no bigger than a bathtub’ and made a joke that the boat was the ‘S.S. Q,'” and also that “SS” stood for Stacey Swain. SSQ released their debut album Playback in 1983 under Enigma Records, which featured the single “Synthicide” that was also made into a music video.

In 1985, Swain signed a recording contract with On the Spot Records, an independent label. Using Stacey Q as her moniker for solo works, she released her debut single “Shy Girl”. Her eponymous album later was distributed in cassette format to limited release. The album contained an early version of “Two of Hearts“, which originally was released and performed by Sue Gatlin. After her singles collectively sold several thousand copies, she signed with Atlantic Records with St. James as manager and the other members of SSQ as backup musicians.

She recorded the album Better Than Heaven in three weeks. Its title track was co-written by Berlin, “He Doesn’t Understand” was written by Rusty Anderson, and “We Connect” was written by Willie Wilcox of Utopia  “Two of Hearts“, its lead single, received substantial radio airplay, along with its music video on MTV, in the latter half of 1986. It reached number 3 on the Billboard Hot 100 chart, and the top 10 in several other countries.  The album reached number 59 on the US album chart, and was certified gold. “Two of Hearts” briefly was considered for a “Weird Al” Yankovic parody, but the songwriters declined. She went on a U.S. and European club tour. 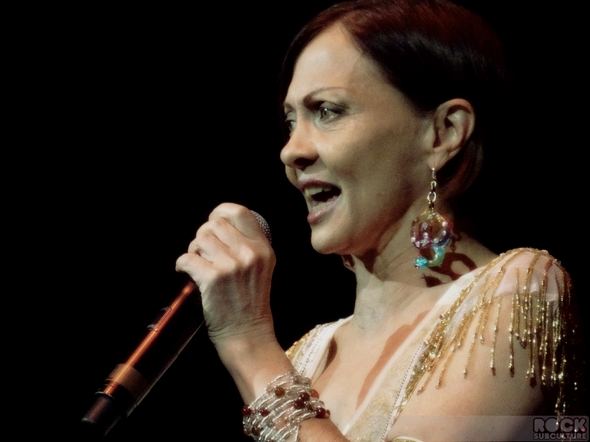 The success of “Two of Hearts” led Swain to television appearances on talk shows as well as guest panel appearances on game shows The Gong Show and The New Hollywood Squares  She appeared as the character Cinnamon in the episode “Off-Broadway Baby” of the NBC sitcom The Facts of Life where she performed “Two of Hearts”. In a follow-up episode, “A Star Is Torn”, she performed “We Connect”. Cast regular George Clooney made his farewell appearance when his character decides to join Cinnamon as a roadie.

Swain released Hard Machine, the second Stacey Q album, in 1988. She changed her hair color from blond to red, and adopted a punk rock-influenced appearance. The album had other producers besides St. James, resulting in a different musical direction. The single “Don’t Make a Fool of Yourself” peaked at number 66 on the US Hot 100, with a remix by Shep Pettibone making the top five on the Hot Dance Chart. The single was featured in the Full House episode “D.J. Tanner’s Day Off“, where she briefly appeared as Stacey Q. The songs “The River” and “Another Chance” were featured in the cult action film One Man Force, where she also had an appearance.

Nights Like This was her third and final album with Atlantic. Released in 1989, it also marked SSQ’s last participation. Its first single was “Give You All My Love,” and “Heartbeat”, its second single, featured backing vocals by Timothy B. Schmit of the Eagles. Its title track featured backing vocals by The Weather Girls. The musical style involved more experimenting with instruments such as Kawai keyboards. She promoted the album with another national tour at various clubs. On television, she appeared in an episode of Mama’s Family in which she was a member of an all-female band called The Bonecrushers.

In 1993, Swain released the single “Too Hot for Love” under the independent label Thump Records. The single was structured toward an early-1990s dance sound and featured sexually suggestive lyrics, representing another change in direction for the artist.[citation needed] Thump also gathered material from her first Atlantic Records album as well as tracks from Q and SSQ that never had been released on CD into a 1995 compilation album, Stacey Q’s Greatest Hits. Most of the tracks were either remixed or re-edited entirely from their original versions in an attempt to modernize them.

In the mid-1990s, Swain traveled to Tibet, where she was introduced to the monastic dance and song of the Far East. She also lived in Nepal where she studied at monasteries with Buddhist lamas and was trained in the ancient art of cham dance.

In 1997, Swain released the album Boomerang, which reflected her experiences in Tibet, as well as her conversion to Buddhism. She also released a cover of a Janis Ian tune called “Tenderness”, which reached number 5 on the Jamaican charts.

Swain provided guest vocals for Hydra Productions, a songwriting duo consisting of Shawn Winstian and Shane Condo. Liquid, their debut album, featured appearances by dance-pop artists of the 1980s, including Tiffany and Gioia Bruno of Exposé. Hydra Productions signed her to a solo deal where she released “Trip”, her first solo single in 12 years, in 2009. This was followed by the album Color Me Cinnamon in 2010 and the maxi-single “Pandora’s Box”. The album was produced by Jon St. James, and explored a modernized electro-house sound. In late October, she released the Halloween-themed Going Goth EP, which featured remixes of many songs from Color Me Cinnamon and the “Trick or Treat” maxi-single the following year. Since then, she has participated in various freestyle music festivals.