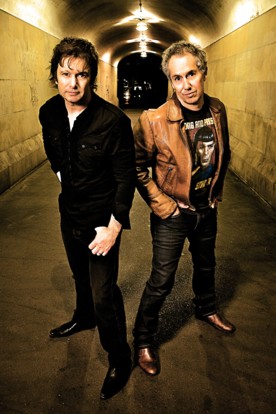 Beginning in London in 1983, The Escape Club spent their formative years playing the U.K. circuit in the Post-Punk, New Romantic early Eighties. They picked up a large live following and by 1987 had released their debut album ‘White Fields’ on EMI. Produced by Scott Litt, it was a guitar-driven culmination of four years on the road and is still jealously held by some hardcore fans as their favourite E.C. album.

By 1988 the band were  thinking of a radical change in musical direction and in the Summer of ’88 The Escape Club burst onto the World stage with their  Grammie nominated, number 1 hit, ‘Wild Wild West,’ the title track of their new platinum selling album. Combining their rock background with the some of the new dance beats that were  emerging at the time,  the album hit a nerve with the late Eighties generation.  Their follow-up release, ‘Shake for the Sheikh’ reached number 28 on the Billboard top 100, ‘Walking Through Walls‘ was another Hit and the band toured extensively throughout the USA and Europe. 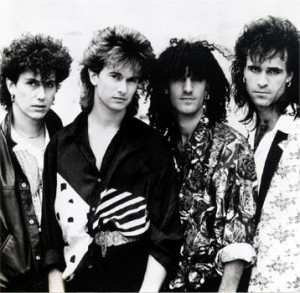 The members of the band, Trevor Steel (Vocals and Guitar),  John Holliday (Guitar),  Johnnie Christo (Bass) and Milan Zecavika  (Drums) always considered live  performance to be at the very  heart  of what they were about and the new Rock / Dance combination boosted their live performance to a new  high.  In 1990 The Escape Club returned to the studio to record their 3rd Album, ‘Dollars and Sex.’ By now Nirvana had  emerged and Grunge was on its way but the band had a surprise number 8 hit with ‘I’ll be There,’ a ballad from the album. Written after the death of a friend, the song touched the hearts of many and in recent times has started to achieve  a growing internet cult status.

In ’ 91 the band disbanded for a while and Trevor Steel and John Holliday went on to write and  produce many U.K. hits throughout the Nineties and into the Millennium. They did produce a studio album, ‘Cloud 10’ which was an experimental departure from their usual sound but the call of the road was too much and the band recently reformed for a new Album and Tour. We may see a tour of the states in the summer or Fall 2018.   New CD Title:  Celebrity available in stores and online now.  Whipped Cream Records ©

Wild Wild West
Ill Be There
Miss America
So Fashionable