The Vapors are a British New Wave power pop band from Guildford, Surrey, England. After an abortive initial attempt at getting the group off the ground in 1978, singer/guitarist David

Fenton managed to form a more cohesive and effective line-up for the Vapors in 1979. The other band members were: Edward Bazagette (lead guitar), Howard Smith (drums), and Steve Smith (bass). The group released their debut single “Prisoners” in 1979; this song failed to chart. The Vapors scored a massive international smash with the infectiously bouncy and catchy follow-up single “Turning Japanese;” this delightfully spiky and e 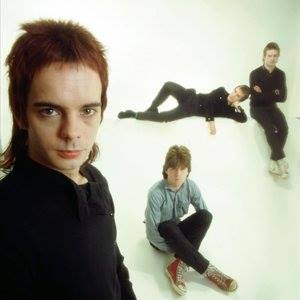 nergetic tune peaked at #3 on the UK pop radio charts in March, 1980 and was also a big hit in Australia.  A much beloved cult favorite amongst aficionados of early 1980’s New Wave music, “Turning Japanese” has been featured on the soundtracks to such films as “Sixteen Candles,” “The Gun in Betty Lou’s Handbag,” “Romy and Michele’s High School Reunion,” “Charlie’s Angels,” and “Jackass: The Movie.” The group recorded two albums: 1980’s “New Clear Day” and 1981’s “Magnets.” The songs “News at Ten” and “Jimmie Jones” both reached #44 on the UK pop charts. Alas, The individual band members have all gone on to successful solo careers: David Fenton now earns his living as a solicitor who specializes in music law, Edward Bazagette works for BBC television as a producer, director and editor, Steve Smith continues to play in bands and does sound mixing gigs on the side, and Howard Smith works at PRS.

in 2016 the Band reunited to have a little fun, the fans are still there,  The Vapors have sold out venues across the United Kingdom and are ready to hit the states. The Vapors signed exclusively to TBBA and will be featured on the highly successful tour “Lost 80’s Live” in 2019, Tour will hit the States, Canada and Mexico. The Vapors are now Now Accepting Offers for Live Performances in 2018-19 for the following situations – Artist Available for 80’s packages, Fly Dates, Club Size Venues, Festivals, Fairs, Casinos , Radio Shows And Corporate Events. contact artist agent at TBBA